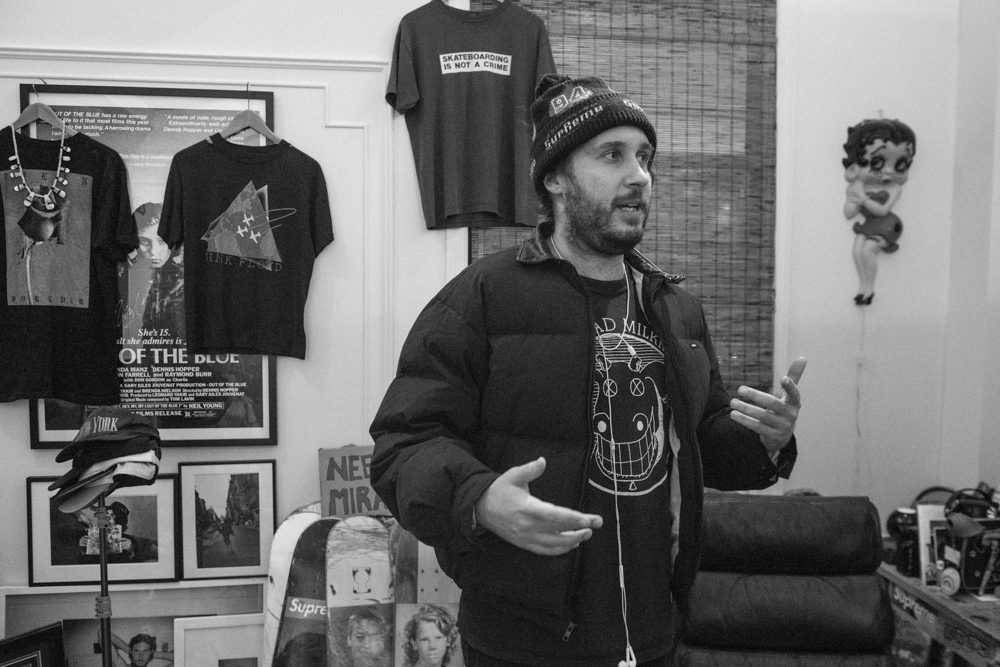 Bill Strobeck made an exact replica of his New York apartment for an installation that’s currently on display at Milk Gallery through the end of the month. It consists of everything from Strobeck’s place, and 2,500 photos shot there over the span of roughly five years. Given the impact of “cherry” and rise of Fucking Awesome, it was a special and influential time that will be referenced for decades to come. Strobeck breaks down the show in a new interview with Monster Children. You can read the pertinent bits below.

Where did the idea for the background come from?

Some friends and I lived in an apartment that didn’t have windows, and I had this room that was like a dungeon almost. It was an old school loft apartment. The building was [made up of] office spaces, and there was this electrical pipe that went around the wall of my whole room, all the way around with a light switch on one side of it. I used to always prop stuff on it, just like whatever I had; put a cassette tape or put a CD and then I would switch the CD. It was just something I did. I do that, like even on the lights that are in this room there’s, like, lighters and all kinds of stuff on it. I just have things that I like, that I wanna see when I wake up, you know? So, people would come over to my old place and I’d be like, ‘lemme take your photo in front of this.’ That’s where the photos of me and Dylan are from, the one where I have the cowboy hat and he has the long hair. When I moved to my new apartment, I was so excited to have my own place, but I was just looking at the wall and there are these two lights, and I knew I had a photo of the old wall blank and I thought, wow, if I blew it up and put it in between these two lights it would make its own, new kinda thing. And that was kinda around the time Alex (Olson) and Dylan (Rieder) were coming over. Even early stages, like, Sage was in town, he was new to hanging out and being around, and Aidan (Mackey). But then eventually, during Cherry, it became this crazy thing. People would call me up and be like, ‘Hey, I really like my outfit—can I stop over and take a photo?’ or like, ‘Hey, I got this wig; let me come over; lets do something crazy.’ And then it became kinda competitive, like, who’s gonna have the crazier one. I dunno, for me it’s just like, in another five years, I might not even be living in this place, who knows where I’ll be. Really, I’ll just look back at it like a time-capsule. It’s something to [keep me] being creative and doing something when I really don’t have anything to do, like, ‘I’m bored—just stand here; let’s buy a thing of chocolate milk and hold it up.’ Just get stupid and be funny, you know? It was right when Instagram was coming into play, so it was part of that.

Did you just have a folder that you put them all into and archive for the wallpaper?

Nah, they were all on different hard drives. I’d even put the same folders on this hard drive and on that hard drive. So when we pulled them all together, there were 22,000 photos but a lot of them were doubles because there were double folders. I had somebody help take all the doubles out and take out all the eyes closed and stuff like that. So, for [the show], there were probably like 2,500 just for the build. We had the measurements. So there’s, like, different ones to what you’ve seen before. There’s a lot from the same sessions, so there are parts of sessions. I wanted to show more than the ones everyone has seen and outtakes of the same shot. I wanted it to be the natural flow of what shooting them is like.